The new MKIII regulator has all the advantages of the older MKII model but several internal improvements have been made to make the regulator even more reliable.

The most common regulator failure that is seen in the industry is failure with the seat and seat cap assembly.  The issue is almost always caused by contamination in these parts.  In the past most regulators in Australia come with a single sintered filter on the inlet spigot (nut and stem).  The new Keg King MKIII model gas double filtration and includes a second sintered filter on the underside of the seat cap assembly.

The seat and seat cap assembly has also been re-designed and now takes advantage of ultra-high molecular weight polyethylene (UHMWPE) the new UHMWPE is significantly better in chemical resistance and stability than the Teflon that is normally used in other brand names.

The regulators have also been designed so that the whole seat and seat cap assembly are manufactured as a fully encapsulated part.  This adds to the reliability and in the case that the regulator is eventually opened up for servicing it reduces the chance of this assembly becoming contaminated by the service agent.  This further improves reliability.

Suitable for CO2, Oxygen, Argon and Nitrogen the MK III regulator is made with high quality machined brass body and can be used on multiple gasses.

This regulator is can also be used on a range of different gasses including: CO2, Oxygen, Argon, Helium and Nitrogen.

The standard type 30 nut and stem comes fitted to the regulator for CO2 and CO2/nitrogen mixed gasses. 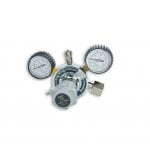 MKIII Regulator for C02
$49.95
Scroll back to top
Shopping Cart
There are no products in the cart!
Subtotal
$0.00
Cart
Checkout
Continue Shopping
0