An old favourite of ours that has been re-named and released as a recipe kit in honour of my daughter Hayley.

This recipe is an Aussie Brewmakers original. It is an old favourite of ours and has been re-named and released as a recipe kit in honour of my daughter Hayley.

The name comes about following a vigorous game of British Bulldog in the school yard in September 2015 that left Hayley with two broken arms.

It is a ‘gutsy’ bitter that on first taste is like a stiff arm to the face and if you are not careful it will leave you plastered.

The recipe is another great introduction to experimenting with hops, malts and grains for the beginner or ‘tin kit’ brewer.

It is the perfect brew to ease the pain of an ambulance and hospital bill when your daughter goes full British Bulldog. Enjoy! 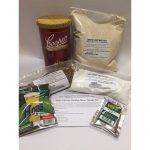